Prior to this week, I focused my trades on momentum and large tech companies.

Now, I’m scaling back on my position size and looking at stocks less correlated to the market.

In other words, I’m lasering in on stocks that are outperforming the overall market, which I consider a strong sign of relative strength.

A good example is IQ, my pick of the day for Total Alpha.

Early in the morning, I sent the following trading plan out: 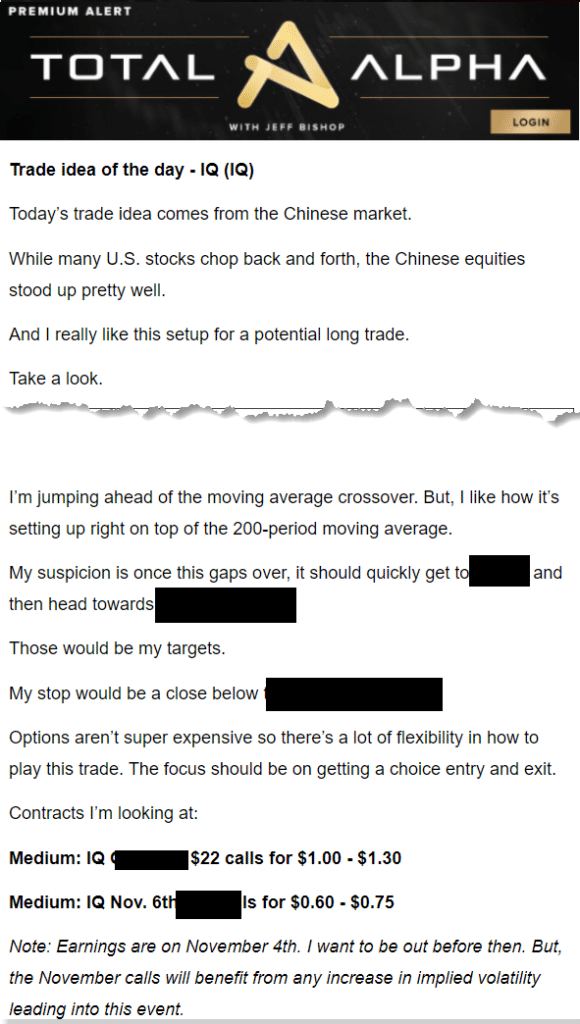 You see, IQ and Chinese stocks traded much better than the rest of the market.

In fact, its one of the few sectors exhibiting a trend right now.

But focusing on stocks with relative strength isn’t the only change I’ve made.

Here are a few others I’ve made, which I believe will improve my odds at squeezing out more profits over the next few weeks.

When markets get choppy, I want to reduce my exposure to losses.

One way is by waiting for better entry points.

As a quick reminder, expected value is a formula that uses win-rate and risk/reward to determine a strategy’s expected outcome based on the averages.

That’s not to say it will tell you what you will make that trade. More, if the trade works like history, that on average if you repeated the trade enough times, your results would look like the expected value.

One of the interesting components of this formula is how risk and reward work.

Let’s use a Total Alpha trade I recently took in RKT as an example. 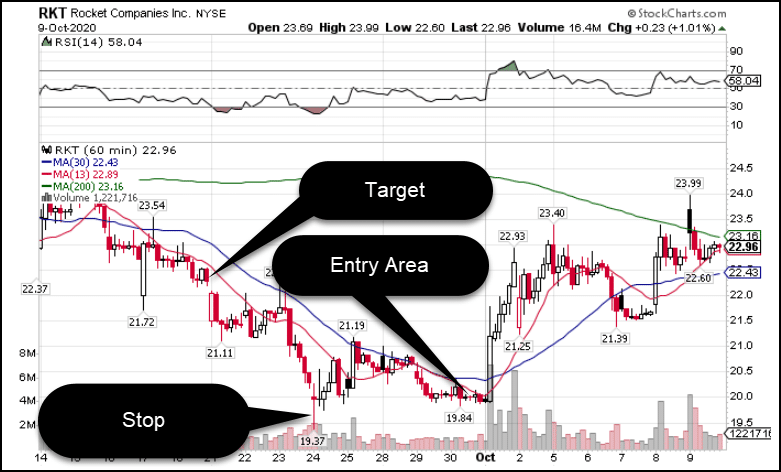 While I played options, assume for a moment I simply traded the stock.

Here’s how it would lay out:

If I win this trade and similar more often than that, I stand to make money on average over time.

This is the type of entry I want – something closer to the stop than to the target.

However, there is a balance.

If I enter too close to my stops, I’ll constantly get bumped out of the trade, dropping my win-rate.

In general, if you took the range from the target to the exit, I want to enter the trade more than 50% of the way between the two in favor of the stop.

Along with conservative entries, I want to reduce the size of my trades.

If I move into more of a day trading type of scenario, then I’d be anywhere from 50%-75% of my normal position size.

Instead, I’d look to take more setups on the smaller timeframes to make up the difference.

At that same time, I absolutely accept that this isn’t going to be one of my most profitable markets.

But, that doesn’t mean I can’t work to pick up some side cash.

One of the hallmarks of this environment is trading ranges.

Many popular stocks are caught in wide ranges between support and resistance. 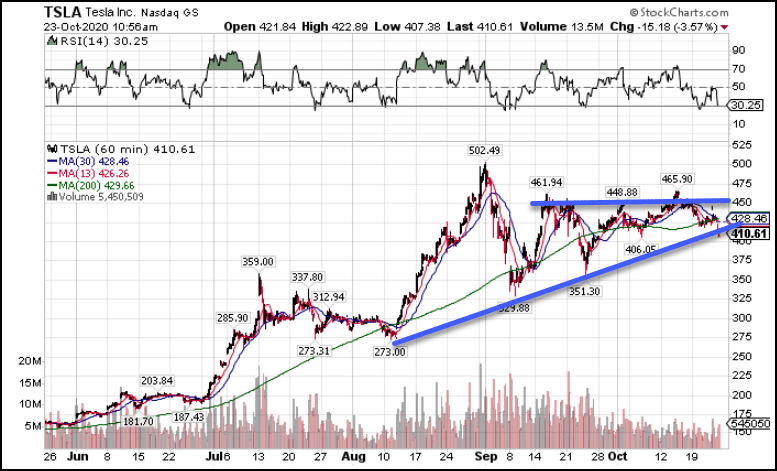 And the lower trendline that connects the lows of the candlesticks hit darn near perfectly all three times.

Unfortunately, that’s narrowed the channel quite a bit lately.

So, while there might be a decent resistance to play against, I’d prefer to wait until shares dropped down to the last breakout area around $273l

If it wasn’t obvious before then let me state it clearly – trade selection is paramount.

This isn’t the time to start testing new trade ideas and strategies.

This is where I hunker down and look for the best of the best.

It’s a big reason why I come up with my best trade idea each day for Total Alpha members.

That way they can start their day off on the right foot.

And you can too.

Do yourself a favor and register for my upcoming Total Alpha training session.

It’s chock full of great education and a host of tools you can use to trade the markets.

Click here to register for my Total Alpha training session.