Uber’s fight with California dangles profits and pitfalls for traders

California and ride-hailing services aren’t getting along at the moment.

However, this high stakes battle of chicken creates a unique opportunity for the savvy trader…

Opportunities I want to bring into the open.

Of course, it involves trading options.

But not the strategies you’re probably thinking about.

You see, trading a situation like this is all about timing…

…that’s why you have to be very careful with your strategy selection and aware of the role that time decay plays in these types of setups.

Why this case is so important

Uber and Lyft already struggle to turn an operating profit.

For the time being, the issue has been kicked to voters.

They’ll decide in November whether delivery and ride-sharing companies should be exempt from California’s gig worker law.

As a state inclined more towards workers, the decision here sets the stage for other places in the U.S., and around the world.

If Uber, Lyft, and other gig companies are forced to reclassify their workers as employees, it adds some major expenses to the equation.

Contractors are typically paid a fee with the expectation that they run their own business and deal with issues such as healthcare, etc.

Depending on the state, employees get sick time, paid time off, healthcare, and other benefits as mandated by law.

For companies that aren’t turning a profit yet, this creates a huge problem for them.

But, they claim that such a move would destroy their business models.

The tussle comes at a precarious time where both Lyft and Uber saw ridership fall hard from the pandemic.

Based out of San Francisco, a ruling against the companies could do more than just shut down their California operations.

The ones who really get hurt are the drivers themselves, many of which rely in part or entirely on the income to sustain themselves.

This is also the same workforce most likely to be hit the hardest from the pandemic layoffs.

So, it’s kind of like a double whammy against them.

All this chaos leads to an environment ripe for profits.

You just have to know where to look…

What we know now is that the issue isn’t likely to be resolved until the election.

So, it’s an educated assumption that the stock shouldn’t run up much higher or lower without any other reason.

This happens to be the biggest news impact to them.

That means I want to find strategies that take advantage of a range bound stock.

In comes the iron condor.

The trade is considered ‘neutral’ since the goal is to have the stock get to expiration between the inner strikes of the setup.

Take a look at the chart of UBER. 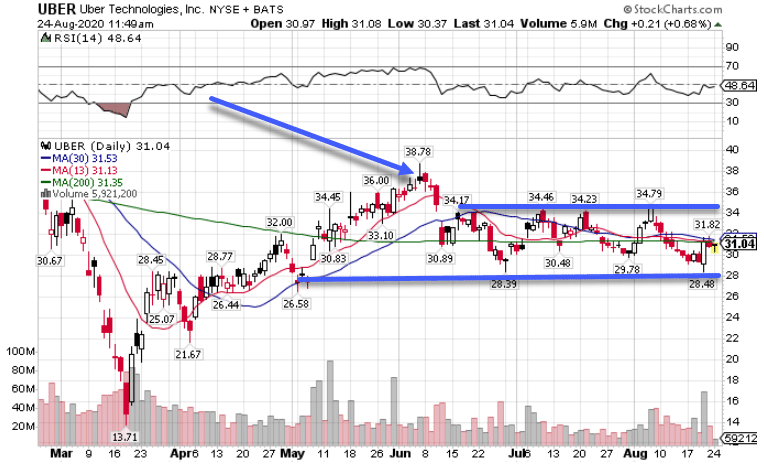 The payoff graph for the trade looks something like this. 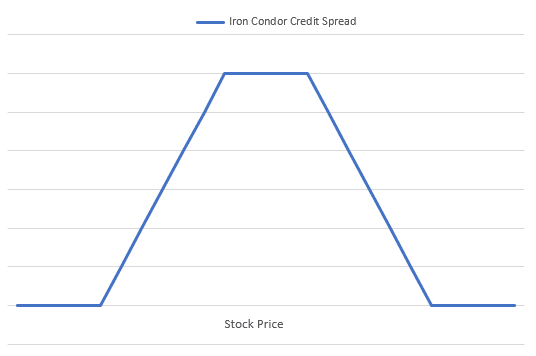 If the stock gets to expiration and is between the inner strikes – $28 – $34 – then I achieve maximum profit.

Because this trade makes money through time decay, each day that passes works in my favor.

And, since I expect the stock to trade sideways, this is a perfect strategy for this situation.

Now, if this strategy seems a little intense, don’t worry. I’ve got you covered.

Check out my Ultimate Beginners Guide to Options Trading to learn the basics that build the foundation for trades like these.