Have you ever traded shares of Alibaba (BABA)?

You might have thought you were trading shares of the company…

But you really owned paper issued by Citigroup!

And that’s not all…

News of a potential ban on TikTok in the U.S. sent investors scrambling.

They didn’t know if their holdings in Baidu (BIDU), JD.Com (JD), and other companies were in danger.

We can’t always eliminate all the risks.

But we can educate ourselves on where they exist and create strategies to decrease them.

Yeah, some of these stocks are in the government’s crosshairs.

While they’re not all in trouble, you need to understand the risks with some of these stocks.

Because the last thing you want is to hold a company like Luckin Coffee (LK) into a collapse. 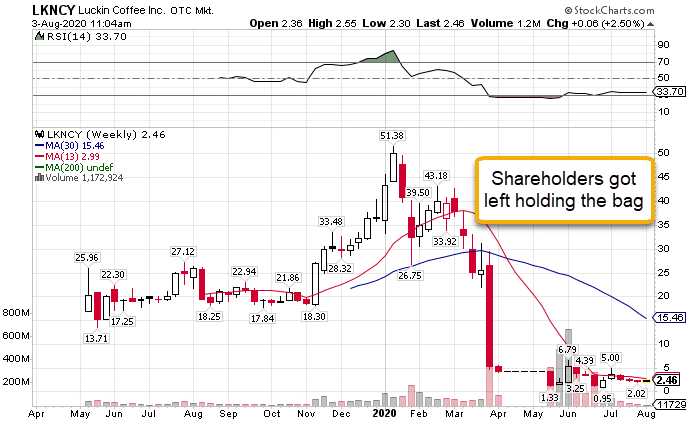 The first thing you need to understand is what it is you’re actually trading.

Foreign companies listed in the U.S.

In many countries around the world, it’s extremely difficult, if not impossible for direct foreign ownership of public companies without crossing huge hurdles.

For traders, that’s not something any of us are interested in.

From our perspective, they’re roughly the same. But there is a slight difference.

Let’s use Alibaba and Citigroup as an example.

Alibaba wants to raise money by listing on the American stock exchanges.

Approaching Citigroup in China, they ask them to set up an ADR.

Citigroup China takes ownership of a certain amount of stock from Alibaba.

They then have two options: ADR and ADS.

When they issue their own ‘shares’ against the stock, which becomes ADRs.

If they issue shares directly, then it becomes an ADS.

In both cases, an intermediary is required as the go-between.

Why Chinese stocks are becoming an issue

All of this started back in 2002 with the Sarbanes Oxley Act. In the wake of the Enron scandal with auditors being in bed with the companies, the U.S. government decided that we needed to audit the auditors.

If you don’t know much about that time, I highly recommend you read up on Enron and Tyco. The depth of corruption was extraordinary, and yet seems applicable to today’s market.

China wasn’t too happy about this.

Their government deems historical audits as classified secrets, especially for companies they have a stake in (which is quite a number).

Since then, it’s been a fight back and forth.

For the most part, the U.S. Congress agrees across the political spectrum that more transparency is needed from foreign companies.

With Luckin Coffee (LK) debuting and then crashing on falsified sales, the issue became more pressing.

Which ones are in danger

Right now, the focus is on national security. To that end, the administration wants to put the squeeze on any companies that are owned by the Chinese government.

This includes major infrastructure companies such as China Mobile (CHL) and Bank of China (BACHY).

Many in the U.S. government and especially the administration are worried about reports of government officials embedded in major Chinese technology companies.

So really, there isn’t exactly one that’s not in danger. It just is a question of the degree.

Profiting from the fallout

As a RagingBull guru, I specialize in options trading. Beyond the obvious benefits of leverage, it’s a derivative contract.

That means I can avoid direct ownership of a company and the associated risks.

Think about it from a trader’s perspective.

Let’s say I want to bet that BIDU is going to gain 1% over the next week. 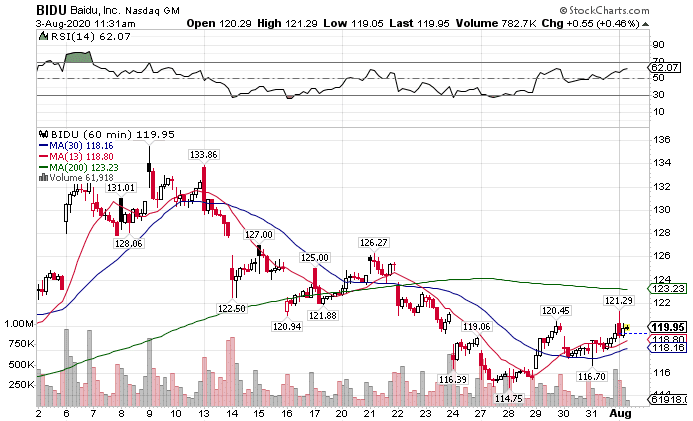 Heaven forbid we get another Luckin Coffee. I could be out most of that $10,000!

But what if I bought call options?

Depending on the contract I might only need to put down anywhere from a few hundred to a few thousand dollars.

But it wasn’t nearly as bad as those holding the stock.

True, owning options means you have to pay the premium when you buy calls or puts.

But there are plenty of strategies that make you the seller and allow you to define your risk.

That’s why I love options!

Learn the wonders of options

When I first learned about options, it was like waking up to a whole new reality.

I could see all these possibilities and avenues that I didn’t know existed.

Which is why I created my Total Alpha Options Masterclass.

Take an in-depth look at some of the strategies and insights I developed over the years and still use to this day.