Three ways to trade a top in Tesla

Before selling off yesterday, Tesla hit a record high of $1,794.99 per share.

The firm is larger than Coca-Cola, Pfizer, AT&T, and Disney (based off market cap)…

Heck, just last week I took down $150K in profits by playing it towards the downside.

No, I didn’t short the stock.

Instead I utilized options to express my view.

However, today I’m going to do you one better.

I’m going to teach you three option strategies that you can use whenever you’re bearish.

Whether you’re a conservative or an aggressive trader, these strategies can help you profit when stocks are crashing.

Most beginners start with long puts and calls. These directional trades limit your losses to the amount you spend to open the trade.

What attracts most people to them is the leverage. For less money up front, you control 100 shares per contract known as a lot.

That means at expiration, your options suffer from time decay faster than in-the-money options.

This is what an example payoff graph looks like. 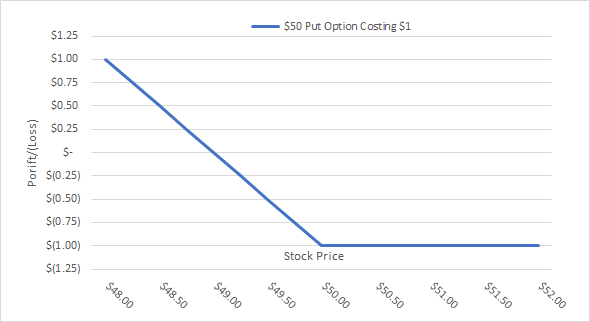 Unfortunately, that’s the tradeoff we face – pay a premium to get the leverage.

When you get it right, the payoffs can be huge.

For example, here’s a snapshot of an option chain on TSLA when it was trading at $1760.

Like I said, it’s not cheap. To breakeven at expiration, you would need TSLA to drop below $1223, which is a huge distance.

And in case you’re curious, at-the-money options cost around $23,000 for the same expiration.

Because implied volatility (demand for options) is so high, the option prices are much more expensive than they typically are.

Alright, so now let’s look at the next choice that’s much cheaper.

Let’s say you are ready to call a top in Tesla. Another strategy is the call credit spread.

Call credit spreads involve selling a call option at one strike price and buying another one at a higher strike price.

This pays you a credit based on the price of the options. Your goal is to keep as much of this credit as possible. 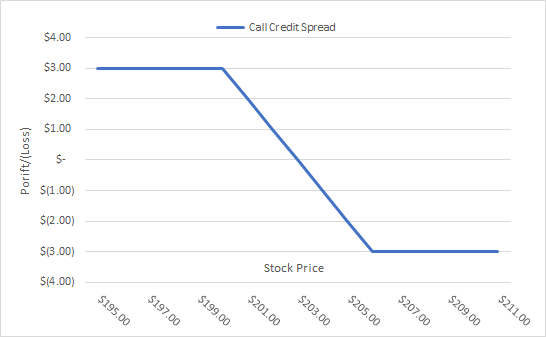 Here’s a breakdown of the critical components.

What I like about this strategy is that you can reduce your total risk dramatically vs a long put option. Plus, even if the stock doesn’t drop a ridiculous amount, as long as it hits expiration below the lower strike price, I keep my maximum profit. And, I can always take the trade off at a partial profit.

The downside is my total profit potential is capped. I can never earn more than my maximum profit.

That makes this strategy more reliant on managing the risk/reward vs the probability of success.

Ok. So we’ve gone over two strategies for playing a top in Tesla. Now, let’s go to the last strategy that typically costs the least, has the highest potential payouts, but also the lowest chance of success.

Butterflies aren’t a trade I typically take. However, traders like Nathan Bear in Weekly Money Multiplier are quite successful with them.

While these trades are a little more difficult to understand, they’re relatively easy to execute. 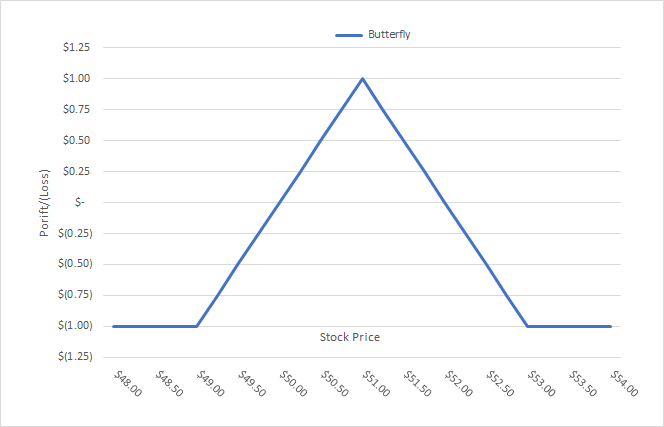 Your goal is to get as close to the midpoint as possible exactly on expiration.

What’s great about this trade is that it doesn’t cost much to put on compared to the payouts.

Now the profit potential is where things get really exciting.

To get the maximum profit, you take the difference between the middle strike and either the lower or upper strike and subtract the initial cost of the trade.

But the odds it lands exactly at that price at expiration are extremely low.

And, these trades tend to not pay out until the last day or two.

So, rather than trying for an explosive trade, using wider wings (which does reduce the potential payout), and taking the trade off at 2x-5x profit is often much more consistent.

Now, I know that I’ve given you a lot to think about here. And this is only touching the tip of the iceberg.

Which is why I want to introduce you to High Octane Options.

This premiere service gets you started learning about how I plan and execute my directional options trades.

It’s a great place to see an experienced options trader at work and gain insight into what I’m thinking before, during, and after placing a trade.