It’s incredible how much can change in a few days.

Consumer spending rose, Americans returned to work…and then IT happened.

Coronavirus cases shot up in Texas and Florida.

Reluctantly, governors hit the brakes on reopening, with a couple of states even retrenching.

This week’s jump puts the news in perspective, taking an objective look at the facts and offering several scenarios.

We’ll also take a look at the recent polling and what that means for the markets.

And not to be left behind, I’ll give you some insight into markets often trade into holidays with waning volume.

We knew the possibility existed of a virus resurgence. Many hoped that summer months would tame the spread.

Now, we know that even the best-laid plans rely on our adherence to them, something that’s become a political problem in a few places.

I don’t pick on Texas and Florida for any reason other than they’re the epicenter of the current news cycle as well as states with large populations. Both chose to reopen quicker than many other states.

In Florida, restless youth left their homes to meet with friends, leading to an explosion in new cases, particularly among younger persons. 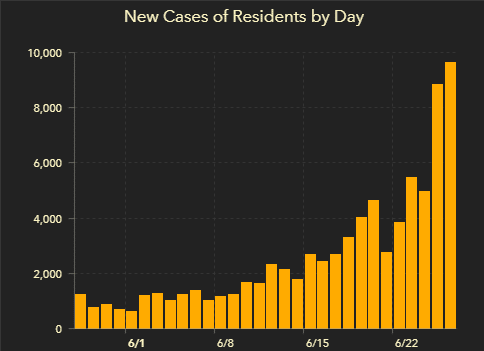 Similarly, Texas found that the new infections skewed towards the younger demographic.

As it stands, hospitalizations increased, but not as drastically as the data would suggest. New cases haven’t increased the need, suggesting that initial findings that younger individuals could tolerate the disease better.

However, they don’t live in a bubble, with widespread concern they will eventually infect their households.

All of this led to bars closing in both states, though no additional mandates have been implemented yet.

Without a vaccine, the push and pull between opening and pausing economies will continue until herd immunity is reached – if that is a possibility.

Current estimates show Florida’s peak from the recent wave towards the middle to end of July.

With a market priced to perfection, supported mainly by Fed dollars, stock prices will rely entirely on their intervention to bridge the gap. The question is how far and long is the Fed willing to support stocks.

As we get the Fed minutes this week, look for any dissension in the ranks. I expect the longer this drags on, the more vocal hawks become, favoring natural price discovery over an ever-expanding balance sheet.

Let’s not forget that the pandemic ties directly into the upcoming election, which is anything but decided.

Without question, the upcoming elections will be one of the most controversial in history. Several states already began expanding mail-in voting, while others refuse.

No one knows how the pandemic will affect voter turnout. But if the primaries are any indication, it could be several days before we know the results of local and national elections.

For all you youngins, this isn’t our first rodeo. The 2000’s election took weeks to tie up. Which, while controversial in its own right, still ended with most of us coming together.

This one is shaping up to be a nail biter.

We know that polling failed us in 2016. However, there are a few points most people gloss over.

First, the national polls were generally correct. They showed Hillary Clinton with a slight edge in the popular vote. That just didn’t translate into the electoral college.

Second, the majority of state-level polls still landed within the margin of error. At the moment, several states show a gap outside of that margin, meaning it would be a statistical aberration based on current polling.

And, as the pandemic and protests continue, the core rallies that solidified Trump’s base come into question.

That’s not to say any of this is a foregone conclusion for either side – far from it. What the data says, combined with the macroeconomic picture, is that President Trump is currently at a disadvantage, both from a weakened economy as well as civil unrest.

There are still several months and a VP pick to go, so anything is possible.

Plus, it appears we won’t see an agreement on additional stimulus. Those benefits start to run out in July, and that could really curtail any economic growth.

So let’s light stuff on fire!

Leading into the July 4th holiday, I expect trading volume to shrink. Like many of us, Wall Street heads out early for the holiday, leaving the juniors and the computers to manage the books.

With recent declines, it’s possible to get some real moves like what led into Christmas 2018.

Right now, I’m preparing a plan for my Bullseye Trade of the week. Laying out my best trading idea, I see a couple of places that look ripe to make an explosive move.

So what is Bullseye Trades?

Stocks I want to bet against this week…

Stocks I want to buy this week…