NKLA is so dangerous, it could do more than blow up and account

I don’t toss out words of warning lightly.

That’s why it’s important you read this carefully!

Get involved in the wrong strategy…and

…You could end up owing money!

Yes, that’s right. If you get into the wrong options trade and get shares called away that you don’t have, it could leave you owing as much as $100 per day/ per contract! 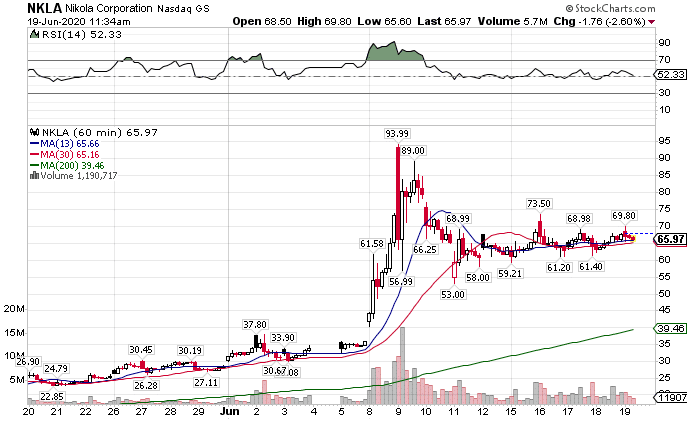 NKLA Is One Of The Most Expensive Stocks To Borrow…Is A Short Squeeze Coming?

However, I’m going to explain how you can avoid that.

As well as, some compelling strategies worth exploring…

Not enough shares to go around

Nikola claims to be the next Tesla. Their market cap has exceeded Ford Motors (F). Price shot up from $20 to nearly $100 in a matter of months.

But, why should that stop people from buying the stock?

Chances are retail traders, who’ve become an inordinately large part of the options world lately, decided to either grab shares of these (just like they did Hertz – HTZ), or they bought call option contracts.

That explains the run in the stock, which happens from time to time.

Everyone is trying to short it now…but they can’t!

There aren’t enough shares to short compared to the demand out there. That’s caused premiums around these to skyrocket.

But let’s break down why that is.

The cost to borrow

Most traders never really think about what it costs to short a stock, partly because most of us don’t do it often and certainly not hold it overnight.

You might be surprised to know that there is a cost associated with borrowing stock to sell it short.

When any trader borrows stock from the broker to sell it short, they do it on margin. When they sell short they often pay what’s known as a stock loan fee. Typically, these are around 0.30% per year. Hard to borrow stocks can be as much as 20%-30%.

Guess how much NKLA is going for?

That means if you have to borrow shares from a broker, it could end up costing you up to $1.03 per share per day, or $100 per option contract!

FYI: Since we’re retail investors, we’re the ones who get screwed.

So, all the people who thought they were clever with butterflies and other trades that leverage high amounts of option contracts to get big payouts with little upfront cash run the risk of assignment on short calls!

Check out how this is playing out in the options market.

This is a snapshot of the at-the-money option contracts going out a couple of weeks.

There’s a couple of reasons for that.

First, traders don’t want to pay the stock loan fees, so they buy put contracts instead.

Second, no one wants to sell a call option because if you get assigned that option and you don’t already own the shares, you’re stuck paying $100 per day per contract!

Here’s the worst part – this is happening to call contracts that are out-of-the-money.

Traders who thought they were safe are getting exercised because the stock loan fees are so high.

Now that you understand what’s happening, let’s discuss the other side – put spreads.

All you have to do then is sell them.

Plus, put spreads can be taken off early for partial profit, so there’s some extra flexibility.

Now, if you already own lots of 100 shares of NKLA, then you can sell a call option against those for a covered call. There’s no extra risks to think about other than what you normally get with covered calls.

Wait a minute…are you trading NKLA?

Heck yes I am!

In fact, I traded the put spreads I talked about just this past week. You think I wouldn’t put my money where my mouth is (option pun intended)?

And look, trading these types of stocks isn’t easy.

That’s why I created my Total Alpha Options Masterclass to teach traders some of my best techniques I learned over the last 20 years.

See if these don’t improve your trading.