While we focused on the stock collapse in March, banks feared a freeze in credit markets.

That’s when the Fed stepped in to purchase everything from treasuries to junk bond ETFs.

Now the Fed is cutting purchases, and MARKETS AREN’T PREPARED!

But you will be when I explain what’s going on and which ETFs are in danger.

You see, normally investors hide money in bonds and ETFs when stocks are falling, thinking it’s a ‘safe’ place to park cash.

When the Fed said they’d buy bonds, it caused ETFs like the TLT to spike – which allowed me to cash in with some strategic option plays.

I wouldn’t be so quick to take this trade again.

But now, the Fed is stepping back from the table, and bonds could be in for a rough ride.

It’s not just TLT, but junk bond ETFs like HYG and JNK are in the crosshairs, and here’s why.

Why the Fed was the only buyer in town

Imagine you were a banker deciding who and when to loan. Sitting in your office, you flip on CNBC and watch markets start to crash in early March. Companies from Boeing to Six Flags are shutting down operations for months, and who knows what they’ll look like when they reopen.

Suddenly, your phone rings. It’s a call from the CEO of one of a local business that does event planning. They’re desperate for a loan to keep them afloat, even though they don’t know when they’ll be up and running nor what it will look like.

Ask yourself, would you lend to this company?

Even if they had been a customer of yours for 30 years?

That’s the dilemma banks faced in March. Delta airlines has been around longer than most of the bank executives have had jobs. Yet, how do you lend a company money when they aren’t doing…well anything?

Now bankers weren’t as afraid to buy the debt, knowing the Fed had their backs.

This led to a massive increase in the Fed’s balance sheet as seen below.

Back during the Great Recession, the Fed took two years to double its balance sheet. This time they did it in a matter of months.

The big change was they began to buy corporate debt including junk bonds. And in a special twist, they stepped in to buy some of the ETFs in the sector.

So now that we’ve got a handle on what’s happened, let’s discuss what’s going on and how to trade it.

Cutting back on purchases

While the Fed took unprecedented steps, they claim they aren’t in the business of picking winners and losers – which they effectively did anyways.

Even though they said they would do what’s necessary to prop up the market, the Fed began scaling back their purchases.

Here’s their schedule from the end of last year until now. 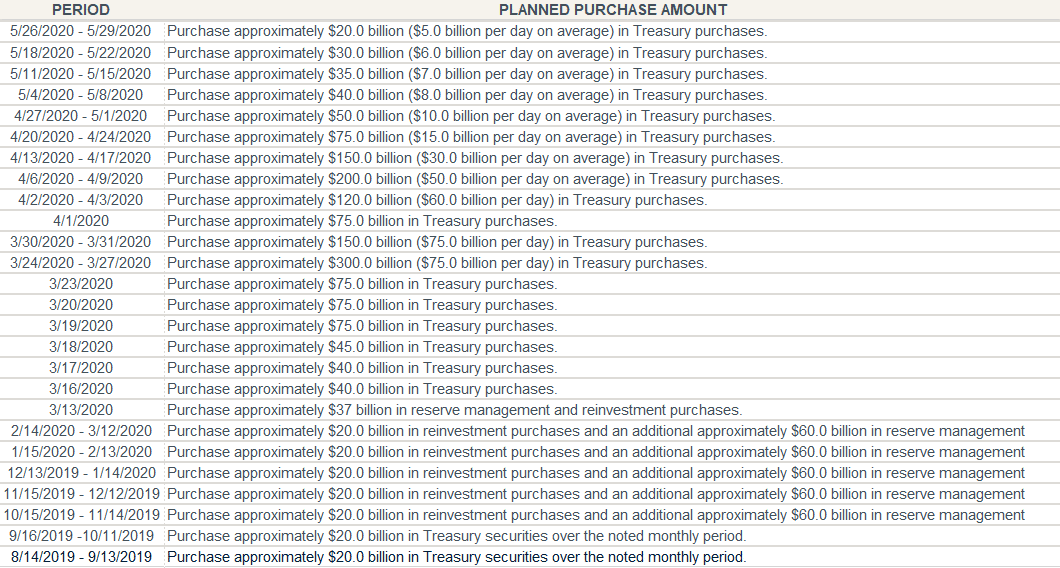 Now, you can see they’ve curtailed the purchases down to the same levels that they had back before the crisis. That leaves the debt markets at the mercy of supply and demand.

Remember, the U.S. Treasury is flooding the market with debt to cover the recent stimulus package, let alone a second one.

All this raises the interesting question – can the debt market support itself?

In fact, this could be a catalyst to send stocks lower. And when you have stocks and bonds heading south at the same time, that’s a problem.

As traders, we need to know what to avoid and where money can be made.

Here are some of my thoughts on some major ETFs.

Whatever trade I take in this sector, I plan to deploy a wide arsenal of option strategies.

Some of these exact strategies can be found in my Ultimate Beginner’s Guide to Options Trading.

Even if you’re a seasoned trader, THIS is the market you want to refresh your knowledge and skills.