How To Prepare For The Biggest Squeeze In Oil Prices

Less than a month ago we experienced negative oil prices for the first time ever in history, forcing drillers to halt production.

But since then, we’ve seen a steep recovery.

…And it’s about to light up some energy stocks!

But you know what?

I have reason to believe that the industry will begin to see a wave of bankruptcies.

You first need to understand what’s causing this pricing pressure, when it’s expected to hit, and who stands to gain.

For the first part of the year, Russia and Saudi Arabia felt the need to go tit for tat on oil production. Neither wanted to curtail supply, even in the face of plunging demand. That led to a current glut of inventory that’s filled up global storage.

Finally, the two agreed to cut output, only after the U.S. absorbed a portion of the reduction for Mexico. However, that only recently happened.

Oil production isn’t something that you instantaneously shut off and on like a light switch. It takes time to turn off production and quite a while to restart.

Here’s an idea of how demand and supply line up according to the U.S. Energy Information Administration. 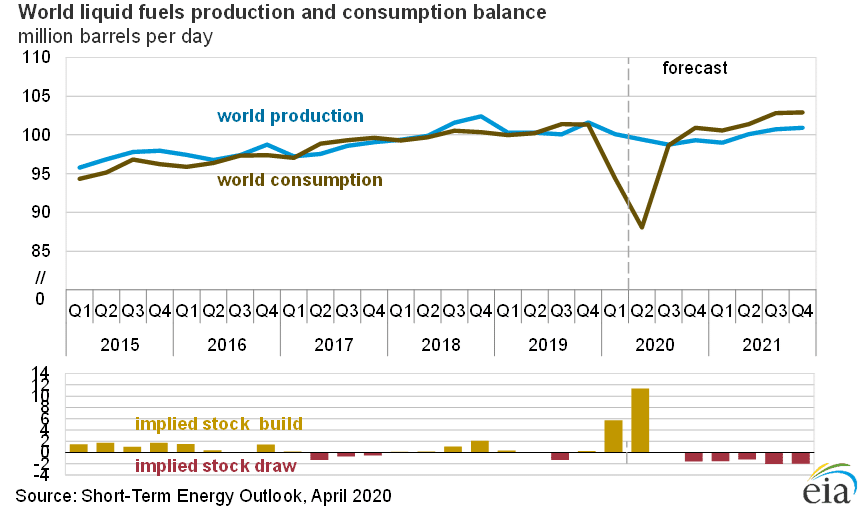 The mismatch caused by the decline in economic activity created a massive build in inventories, which is why we saw crude already go negative. 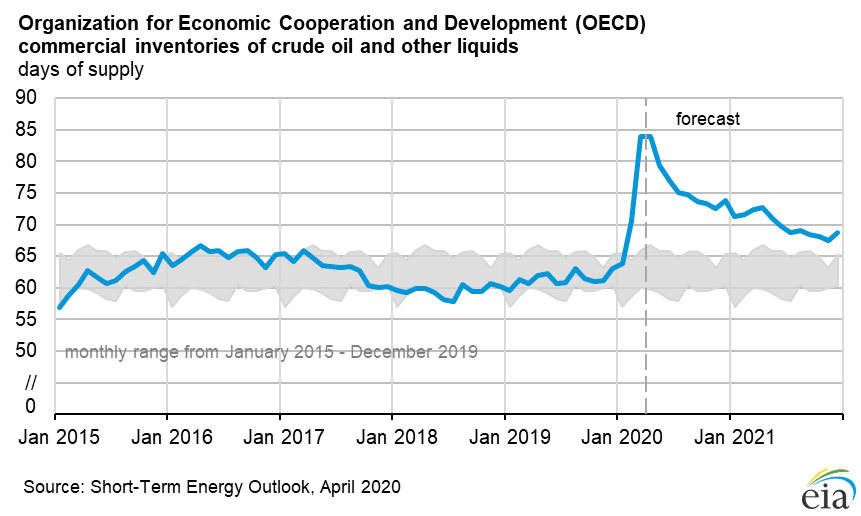 So, how are we going to overcome such a massive amount of supply?

Global oil production didn’t just decline, it came to a complete standstill. To give you an idea of the scope of the change, we had 292 oil rigs in operation last week according to Baker Hughes. Last year, we had 805.

These rigs aren’t just something you turn off and on at the drop of a hat either. As I mentioned before, they can take weeks, if not months to return to full operation. That also assumes you can get the workers back.

On top of that, the U.S. is set to face a wave of bankruptcies in this sector in the coming months. Now, most market observers expected this to come at some point. The boom in fracking created an abundance of supply that wasn’t necessary.

However, having them all hit at once can disrupt the industry. Banks are tightening lending to these companies, fearful that they can’t even operate cashflow positive.

Add into this entire mix a reasonably large cut from Russia, Saudi Arabia, and other OPEC states, and you’ve got the makings of a supply cut that looks to overshoot its mark.

For as little as we know about the post-COVID world, there’s a possibility things return to normal quickly. It’s not likely, but it is possible.

Even under a more tepid scenario, consumer spending on energy is climbing as people return to work around the globe. It’s unlikely demand returns for jet fuel, especially given the asset liquidation in airlines.

You needn’t look any further than the U.S. summer getaway. Typically, Americans start their summer travels around June, with many hopping in the car to travel around the country.

Already, we’re seeing a preference for automotive travel over air for obvious reasons. While one doesn’t make up for the other, it’s nonetheless a key driver for consumption going forward.

Big integrated are my favorite plays

Just the other week Hertz Rental Cars (HTZ) filed for bankruptcy. That caught me off-guard, as I thought they had a better balance sheet.

That goes to show you that even the big guys hold risk…and it’s why I don’t want to mess around with smaller oil names.

Companies like Exxon Mobile (XOM), Chevron (CVX), and Conoco Phillips (COP) have withstood the test of time. If I’m going to play a rebound in oil, I’d start with these guys. They not only have the money to withstand this soft patch, but snap up smaller competitors.

Now, the other way I like to diversify my risk is with the energy ETFs. My favorite is the XLE ETF that tracks the S&P Energy Sector. 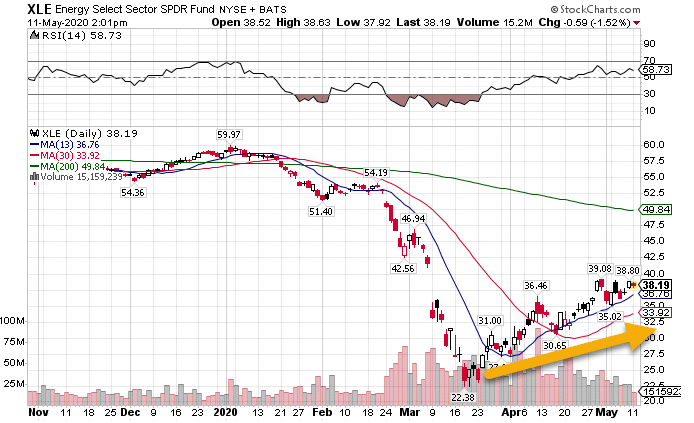 The ETF not only has a beautiful uptrend, but it yields a nice 2.68% dividend yield.

Are there other plays out there with greater potential return? Sure. But, I find these ones to offer the best return when you account for risk.

Accounting for risk in your trades

Risk is number one in my book for concepts traders need to understand. It’s broken some of the biggest funds out there that ignored some basic precepts.

One way to get a jump on the market is by learning the essential skills and strategies taught in the Total Alpha Bootcamp.

Click here to discover the power of options, enroll in the Total Alpha Bootcamp today.