The Fed Lost Control And We’re All Screwed

The Fed’s worst fears may be materializing.

Back in March, central banks around the world stepped in to prevent the credit markets seizing, and everything seemed fine for a while…

But now, banks are tightening lending if not shutting it off altogether…and we are the ones getting the shaft!

Of course, this creates serious problems for main street.

One which you need to understand… before it’s too late.

Because this isn’t just about the stock market… people’s livelihoods are at stake.

While the rest of the market has witnessed a rally off the lows, financials still remain +30% off their highs. 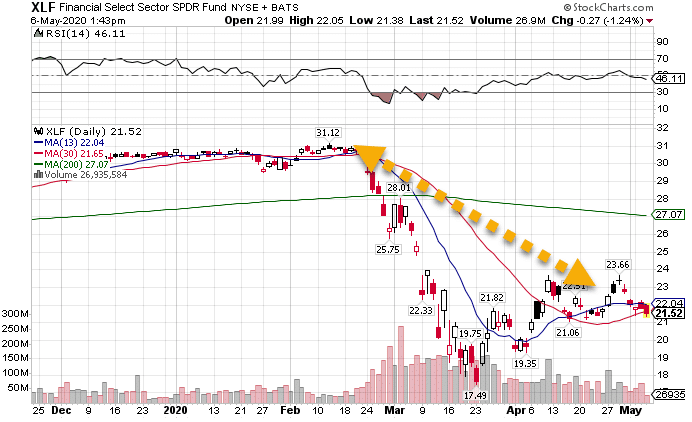 Despite what you may think, the cause isn’t so obvious.

When I tell you what’s causing tighter lending, you’ll realize how little control the Fed has.

That’s right…you! Well maybe not you specifically, but investors as a whole.

Crazy as it sounds, shareholders are the ones putting pressure on the banks to curtail lending, a significant source of income.

Why would they do this when home prices continue to rise due to a shortage of housing inventory?

There’s more uncertainty about the future of individuals and their businesses than ever before. No investor wants their bank to take on unnecessary risk and lend money to those who may not pay it back.

But guess what…this is only part of the story.

In the past several months, banks raised their minimum credit scores for these products. Wells Fargo took HELOCs from 680 to 720. They’re also suspending various programs including cash-out refinance, and higher risk loans.

Right now the freeze on these products is ‘temporary.’ However, increasing standards at a time when many folks might be struggling with payments can severely crimp our economic recovery.

And the Fed is powerless to stop it

Despite their best efforts, the Fed only managed to help big businesses stay afloat.

Massive amounts of cash spilled into the market, propping up businesses that probably had no right existing.

In an attempt to go completely overboard, the Fed talked about purchasing corporate debt on everything from highly rated banks to junk bonds.

But when it comes to the average individual, they can’t do a whole lot.

Stimulus passed by Congress provides the only source of debt for small businesses and individuals. Yet, the Paycheck Protection Program already ran dry once and looks to do so again.

Eventually, the benefits from the massive +$2 trillion package will run out. If the economy hasn’t sufficiently recovered, that leaves lending tight, with main street taking it on the chin.

The looking brick wall in bonds

Traders smoked bonds yesterday on the back of news the U.S. treasury launched a 20-year coupon bond and $96 billion in refunding.

Right now, the Fed plans to expand its balance sheet and keep buying up U.S. debt. But at some point, if the economy doesn’t return, we’ll be facing down a massive debt problem and no way to repay it.

That’s when things go from bad to worse.

Consider all the loans being rolled and refinanced now at ultra-low rates. What do you think would happen if the Fed lost control of the bond market, causing interest rates to skyrocket?

You think many of these companies would be able to survive paying 2x-3x the interest they are now?

Gradual increases in lending rates are one thing. Markets can accept those. Massive shocks slam the brakes on lending altogether.

The other side of the coin is the economy recovers and the Fed lets its foot off the gas. If traders catch any whiff of the Fed being anything less than a full-fledged dove, they’ll smash treasury prices into the ground.

Here’s how I’m trading it

Short-term, you don’t fight the Fed. That means I’m long bonds through the TLT ETF at various points. Sometimes I’ll do outright calls. Others, I toss on a few put credit spreads.

However, as we keep approaching the spike in treasuries made back in March, I’ll be cautious of swift drops in bond prices.

Many of the strategies I plan to use are listed in Options Trading: The Ultimate Beginners Guide.

It’s a great resource to learn the basics or brush up on your skills.