I’m talking about gold…and get this…Jerome Powell knew about this!

A few Total Alpha members emailed articles asking me for my thoughts on gold.

And after looking into it for the better part of the weekend, I feel obligated to share them with you, because there is a risk that isn’t being discussed. 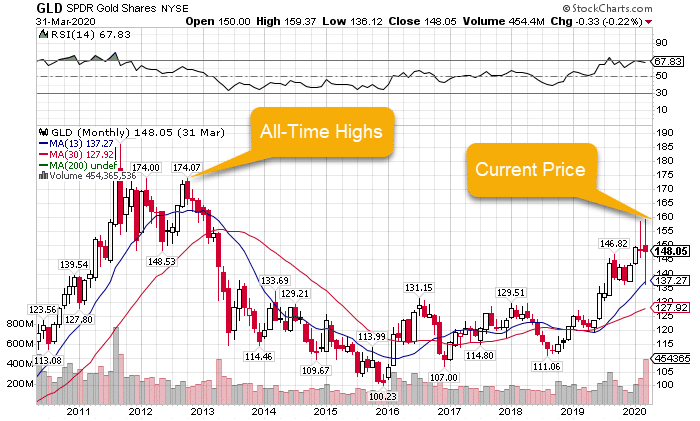 Apparently, the lessons from the Great Recession didn’t make their way to every corner of the market.

Why do I say that?

Because we don’t have enough gold on hand to cover if everyone decided to exercise their futures contracts and take delivery of physical gold .

And that, my friends, could be a disaster in the making.

Gold works much in the same way that crude oil does. Most of it trades in futures contracts. They trade with different expiration cycles.

Unlike option contracts, futures contracts require you to take delivery of the item if you hold it at expiration, rather than if you choose to.

You might have noticed that there are two types of oil in the market – west texas intermediate and brent. Those are based on where oil is settled (U.S. vs U.K.). The same thing occurs with gold.

Most gold futures settle as cash. That means they never take delivery of the gold itself.

But what if you wanted all that gold? Could you get it?

That’s an interesting question and the crux of our potential dilemma.

Unlike oil that requires specialized storage, gold can pretty much sit wherever you want it to. On the other hand, getting it to where you want is tricky.

With oil, we didn’t have enough storage to meet the supply. In this case, there isn’t enough potential gold or gold in the right places to meet demand.

Despite the disconnect in markets recently, people hoard gold during times of uncertainty. You’ll see people start buying up the physical asset when and where they can.

Except, right now, you can’t do that.

In fact, if you try to buy gold bullion online, not only will you be paying a huge premium over the spot market value, you’ll be lucky to find any.

That means someone’s got to ship it to your location and that costs money…lots of money that isn’t necessarily being factored into everyday traders’ decisions.

As I mentioned, you’d have a tough time getting gold here in the U.S. That seems a bit nutty, but it’s also a large part of why we don’t use the gold standard anymore.

In fact, Jerome Powell alluded to this in his testimony last year as to why we don’t want to go back to the gold standard. There simply isn’t enough gold to cover all the contracts in existence.

Recently, the Chicago Mercantile Exchange (COMEX) and London markets changed their rules to allow 400-ounce bars in London to be substituted for delivery of 100-ounce bars on U.S. contract that was divided up four ways.

Here’s where the rubber meets the road.

Every time Chicago markets fall short on supply they need to do two things.

That’s a large reason why the difference between gold futures and spot prices has been wildly diverging.

We could already be in crisis mode

Initial rumors suggested that some bullion banks that were supposed to make physical delivery in Chicago essentially went under. In theory, that’s what led to this new fractional futures contract from the COMEX.

Congressman Mooney of West Virginia caught wind of the entire matter and demanded answers as to the change. As he eloquently noted, if there are widespread defaults, you don’t have nearly enough gold on hand to cover delivery, which could create financial chaos.

On top of all this, the delivery problems between the U.S. and London may be only part of the issue. Back in London, there could be an issue with delivery between banks.

London trades what’s known as ‘unallocated gold’ or ‘gold credit’ which is issued by the bullion banks. When market makers don’t believe the other can fulfill their obligations, the markets start to freeze up. This might be why gold trading volumes in London have fallen while gold futures volumes have skyrocketed.

How that impacts the ETFs

Thankfully, the GLD ETF trust holds its gold bullion in London, so any transport issues shouldn’t become an issue with the ETF.

However, if there really is a liquidity issue between the market makers, then the ETF could be in for a world of hurt. It derives its prices from the London markets, not gold futures. If participants really are afraid to trade with one another, then share prices of the ETF may get thrown out of whack.

Nonetheless, because the ETF is backed by physical assets, any dislocations from price would be temporary. AKA – you could find some cheap buying opportunities on some crazy news!

…leave the heavy lifting up to me. I’ve been through this a time or two and know how to weave my way through traffic. You join me and get exclusive access to my live portfolio. There, you’ll be able to see exactly how I make my trades in real-time along with text alerts.

Why put yourself through the headache of figuring out the gold markets?