Did you know that the consumer staples sector is outperforming the S&P 500 by 8%?

I’m talking about the grocery stores, the pharmacies…and all the other places that remain open during this lockdown period.

Heck, some of these stay at home plays have led to some sick profits.

My favorite in the group has been Amazon (AMZN). With so many folks ordering online now, I got some great Total Alpha trades in this stock.

Some of these trades come right out of my masterclass!

Folks, we’re at a critical juncture in the market. I believe some consumer staple stocks are due for a run. But you shouldn’t just throw your money into any old safety play.

In fact, one traditional safety trade is about to get blasted…

And I want to tell you all about it.

Bond buying is unlimited… until it isn’t

A couple of weeks ago the Federal Reserve came out and pledged to back the financial system with zero interest rates and quantitative easing. They saw the problems ahead and decided to flex their muscles.

So, why would they start tapering off their bond buying program? This Thursday, the Fed is expected to cut its purchasing of U.S Treasuries from $75 billion a day to $60 billion per day.

As they navigate uncharted waters, the Fed is trying to figure out the right level of purchases. It wound’t be a surprise if they upon finding that to be too little they resume the pace.

For us, that makes it a trick bond trade. We’ve already seen the TLT rally to historic levels. 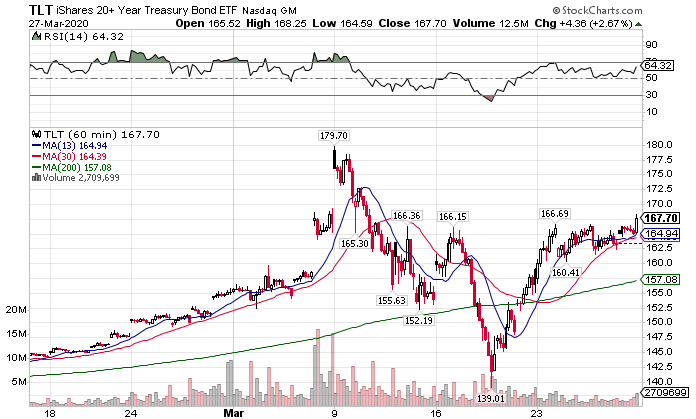 If the market doesn’t like what it hears, bonds could quickly find themselves selling off along with equities. It makes me skittish about taking any new long bond trades here.


Instead, I’d rather look at the glorious metals market.

Gold and silver make me quiver

We saw what amounts to a massive unwind in the gold and silver markets. These normally sleepy areas woke up crying and crabby.

Take a look at the rout we saw in silver just the other week. 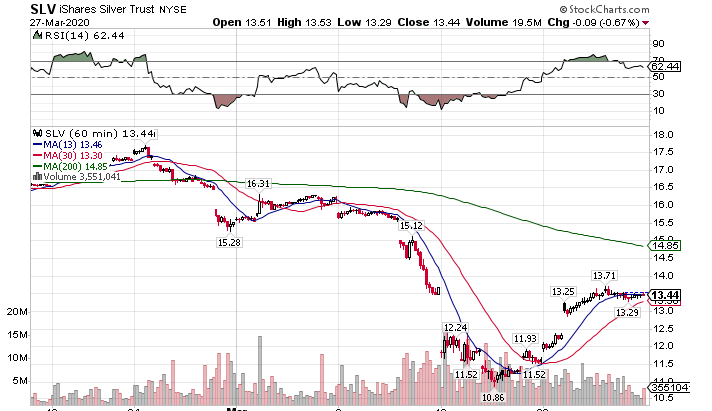 Long-term, this is a great ETF to hedge your portfolio with. Short-term, it’s a 50/50 whether it gets creamed with the markets again. However, if it dips back down to near $10 again on the SLV, I’ll be stepping in with some trades.

Right now, I like gold as the trade of choice against a falling stock market. I believe we’ve seen enough liquidation in the yellow metal. I like the chart setup here with the bullish consolidation pattern forming. 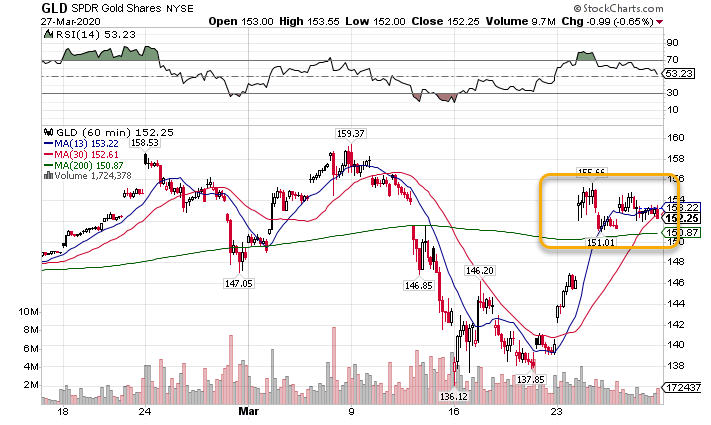 Unlike silver, gold managed to recapture it’s 200-period moving average on the hourly chart. That’s a bullish sign that should lead to higher prices.

However, I want to keep any trades here on a tight leash. Daily closes below the 200-period moving average and I’ll walk.

I would have thought the administration would step in and muscle Saudi Arabia into production cuts by now. Instead, more oil is pulled from the ground as demand falls off a cliff. That’s made oil as cheap as it was when I was in college.

This is when you know things are starting to become a problem. Take a look at the USO ETF chart. 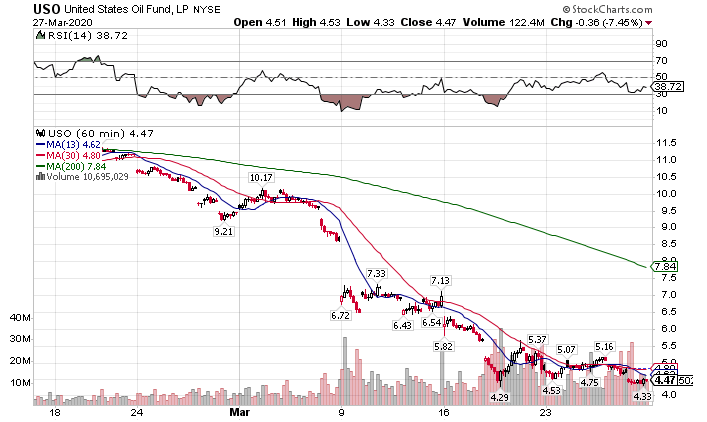 Chances are this ETF will need to do a reverse split. They’re probably not the only ones. I expect we’ll see some of the 3x leveraged ETNs start to go under in the near future.

Just to give you an idea, here’s a quick list of some that are closing up: AMJL, MLPZ, OILD, OILU.

Volatility may be here to stay

Typically, when stocks rise we see volatility contract. That has yet to happen in any meaningful way, even with these record rebounds. In fact, we’ve actually seen the VIX go up alongside equities. 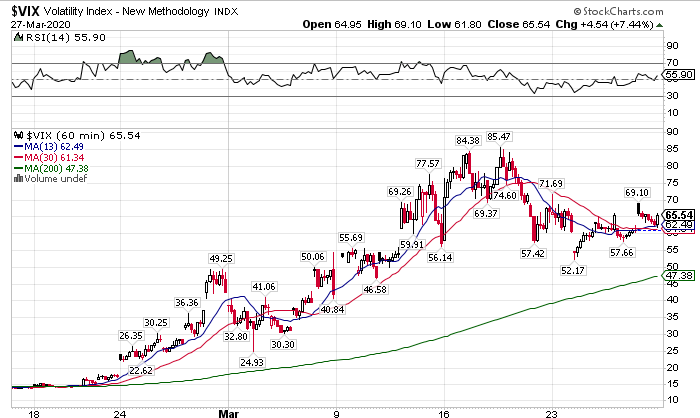 Why is this happening? No one believes the rally. Investors and traders are using any rebound to buy protection in the form of options on the S&P 500, and for good reason. Despite the massive stimulus bill, we still have no clarity as to when all this will wind down.

For now, we may be set up to experience one of the longest periods of elevated volatility in history.

Heck no! Elevated volatility means that I get paid way more for my option trades than normal. Some of these option contracts are paying me 4% on the stock’s price in a week to sell them.

I don’t know about you, but that is a rich payout.

The best way to take advantage of these trades is to learn how to set up these option trades. There’s no better place to learn these strategies than starting with my free options masterclass. You’ll get immersed in the basics of options and partake in some secrets that I’ve only recently begun to share.