Is Negativity Bias Costing You Money?

Why is it that we spend more time agonizing over our losers than learning from our winners?

They say trading is 90% mental and the other 10% is mental. No matter how many years I trade or millions I make, I will never break free of my emotions.

To many of you, it feels like a never-ending battle, where unless you consistently win, you always feel like you’re losing.

It doesn’t have to be that way. You don’t need to wallow in self-doubt to become a better trader.

You need to create a positive outlook!

Yes, that’s easier said than done. It didn’t happen for me overnight, and I’m still working on it rigorously. But, with the right tools, you can start to change your attitude today.

Let’s explore why a positive mindset is so important and how you can improve yours.

Are you focused on the negative?

There’s an actual psychological phenomenon known as ‘negativity bias.’ Doctors and scholars have studied this for hundreds, if not thousands of years. It’s inherent in almost every aspect of our lives from schools to politics.

Funny thing is…no one really knows why. There isn’t a good explanation for what causes this to occur. Some think it’s our survival instinct that focuses on getting away from danger. Others say we perceive negative events with more vitriol.

Just because we don’t know what causes it doesn’t mean we can’t beat it back. In fact, the very first (and most important) step to the process is recognizing you have this problem like everyone else.

Every trader wants to make money – that’s a given. The irony is that makes us worse at turning a profit.

Back when I used to play poker, I started out like everybody else. I would get elated with making money, but be even more upset when I lost with pocket aces. It wasn’t until I accepted the losses as part of the game that my fortunes changed.

Trading works the same way. You have to approach it like meditation. Accept that losses are a part of the business. No trade is risk-free. Since it’s is a business of probabilities, why not focus on making the right decisions instead?

The more correct decisions you make, the more likely you are to make money in the long run. That’s how probabilities work. It’s why I focus on making the right decisions instead of the outcomes. Sure we can time the market with some accuracy. But even though I made a killing on the first major down move of this correction, I had no idea it was going to swing with such force.

Use a trade journal

One of the best ways to keep yourself objective is through a trusted trade journal. This arbiter of truth will tell you exactly where your problems lie and opportunities exist. It is the single greatest key to unlocking your profit potential.

When I have a negative mindset, I look back over my trades to see whether it’s warranted. Carefully analyzing my performance let me know whether my feelings are justified or foolish.

A good trade journal logs all of the following for your trades:

Here’s a great example from my good buddy Nathan Bear in Weekly Money Multiplier. Despite making millions, he still logs his trades every day. 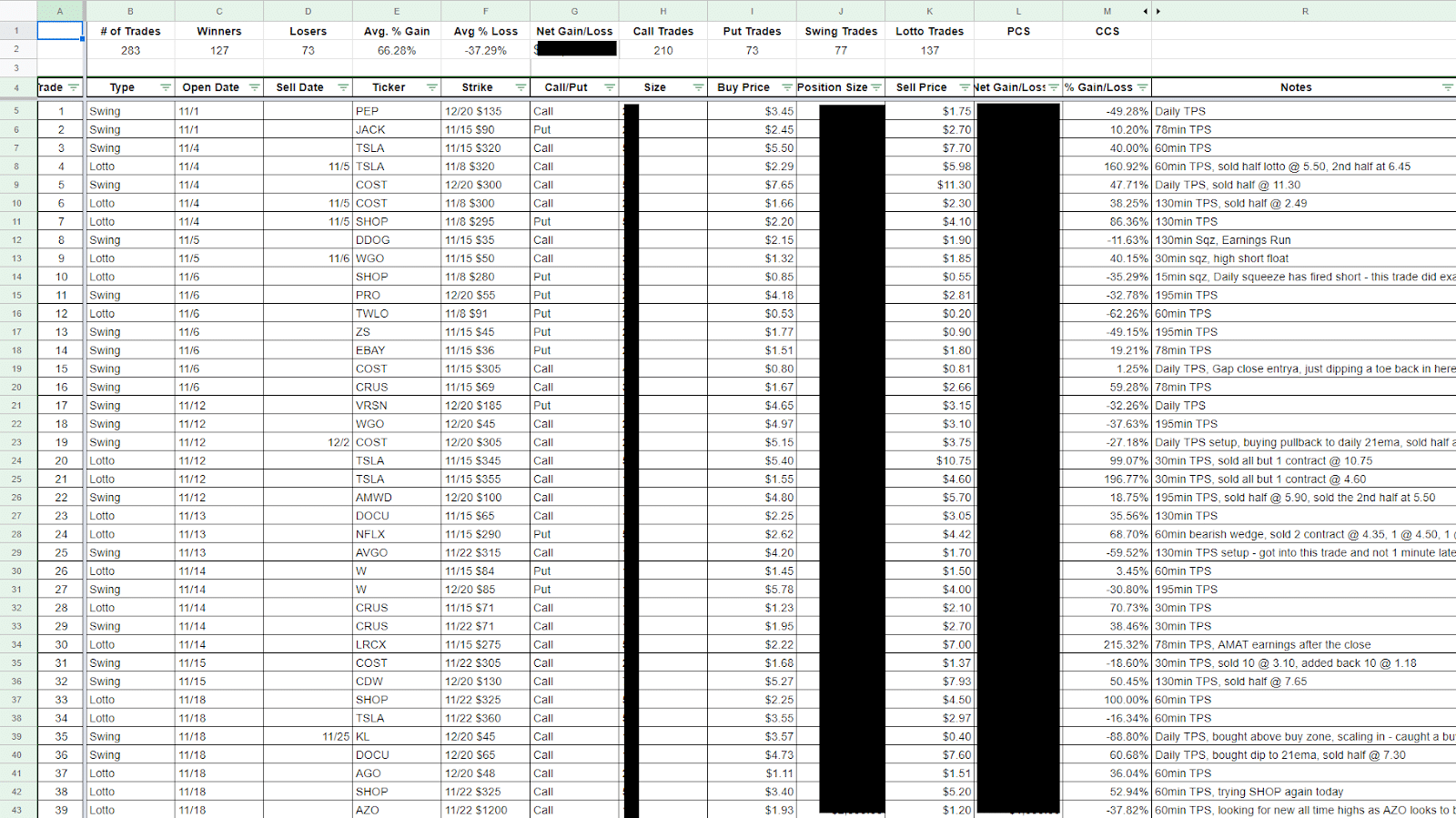 These don’t need to be fancy. What’s important is that you can accurately review your performance and spot your mistakes, as well as your improvements.

The first time I heard this phrase a light clicked on. If trading is about probabilities, then the more trades I take, the more the probabilities take hold.

Rather than lose my shirt on every trade, I wanted to take a variety of trades with my strategies. No single trade would discourage me so much that I would lament it for weeks on end.

This also has the added benefit of getting you out of any rut much faster. More trades means you get through bad runs faster and back towards the averages.

Keep this in mind…

Trading may be a business, but it should still be fun. I don’t know too many successful traders that hate what they do.

Don’t take it so seriously that you lose enjoyment.