Was Trading TSLA Worth It?

And of course, no large-cap stock has been sexier to trade this year than Tesla.

Today I want to talk to you about two TSLA trading stories that highlight what it’s like to trade a high risk-high reward stock.

First, a whopper of a success story. A new TA member that joined after attending my free class did the incredible…

David turned $430 into $12,248 in 2 days just from the Total Alpha Membership training videos!

David was able to cash in by buying puts, but that wasn’t the only way to play the pullback in Tesla.

For example, another trader I know sold a call credit spread on Monday, the day before price topped out, choosing the $740/$750 strikes with the Feb.21st expiration.

With the stock closing out $748 on Friday, you’d think this trader would be sitting pretty now.

How is it that the conservative call credit spread strategy failed while the expensive put buying strategy worked?

But it’s a critical lesson nonetheless.

Putting The Move In Context

The move in Tesla reminded me of stocks during the.com bubble in the late 1990s. While many of them had real profits others did not. And yet, they would keep trading higher and higher. 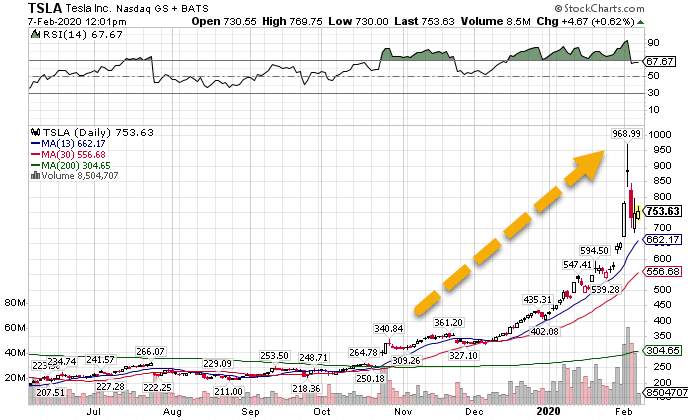 Tesla’s move hit what’s known as ‘fat-tail risk.’ While most stock movement falls under a normal distribution curve, the propensity for stocks (and markets) to crash up and down creates a skewed probability at the end of the distribution curves. 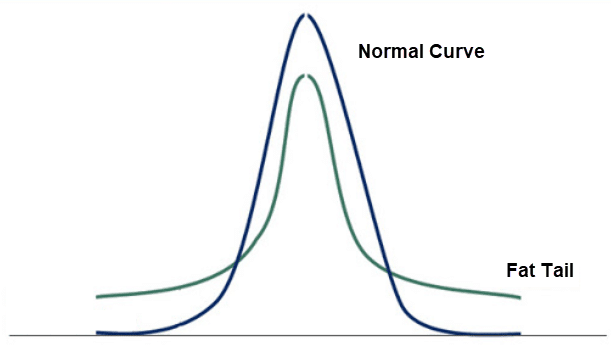 That’s part of why way out-of-the-money options aren’t any cheaper. The propensity for stocks and markets to make outsized moves is much higher than a normal distribution curve would assume.

Effects of The Short Squeeze

When Tesla started ratcheting higher, trades got hit with a ‘short-squeeze.’ This happens when a trader bets against a stock by selling it short. They borrow shares from the broker or 3rd party and sell them in the open market. Then, they buy back the shares at a lower price and make up the difference.

Because they borrow on margin (essentially credit), if their losses keep growing the broker will eventually cut them off. That forces them to close their positions by buying back the stock. Their buying pushes the stock higher, which forces more out of the trade, and creates a vicious cycle.

Now, there are a few other effects of this whole process. First, the stock becomes hard to borrow. That means you can’t readily short the stock through most brokerages.

Third, because the shares become harder to come by, traders face an increased risk of assignment. That means if you sold a put, you could be forced into a short-position. The problem is that not all brokers will automatically offset that with the other put that the trader owned to close out the spread.

How the story played out

The Tesla trades played out in two very different ways. Total Alpha member David bought puts on the stock, albeit at very high prices. However, he managed to time the trade well enough that he picked the top off perfectly. That mean implied volatility was elevated which kept the premiums. That’s how he captured such a whopper of a profit.

With my friend’s credit spread, he had the right idea. With elevated implied volatility, and a parabolic move, the right call mechanically was to sell options. However, the price of the stock created an assignment risk that he couldn’t readily absorb. Even though he gave himself plenty of time on the trade, if he were assigned shares, it would wipe out his account.

The same training that Dave received is available to any member of Total Alpha. You could be the next standout!