Your Jump on the Week

Break out the bubbly as we’ve almost made it to the end of the year.

Global financial markets took us all for a wild ride— but we’re poised to finish off having one of the best years ever in the U.S. stock market.

Over the last century, the S&P 500 has had just 9 years that it returned more than this year.

And if you haven’t heard the comparisons yet, check out this year’s returns compared to 2013: 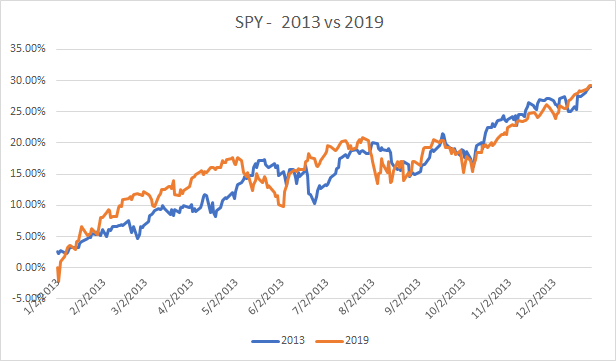 Although I spent the last week on vacation in the Bahamas, I still managed to work some trades for healthy profits into the end of the year.

Not a bad gain on my Bullseye Trade going into Christmas!

That doesn’t mean everything is smooth sailing. So how about we grind out these last few days the Total Alpha way, shall we?

Until the bell drops and people return from holiday hangovers, there are still some catalysts this week, worth exploring, and potentially making a few bucks off.

Things looked like they might be turning around for China… until the bill collector showed up. Chinese companies are defaulting and borrowing at record levels. And that’s what the government wants??!!! 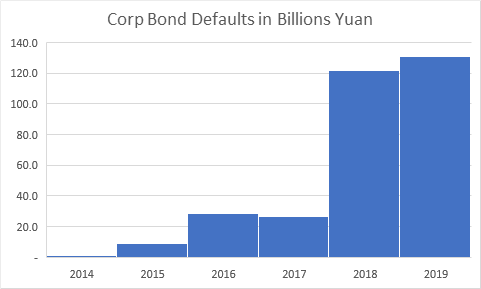 While many companies still enjoy state-backing, the rate of defaults is becoming worrisome. China wanted to purge its economy of zombie corporations that survived on cheap debt. That forces investors to evaluate the creditworthiness of each company.

This actually brought in money to the Chinese debt market from outside. That made policymakers a bit more comfortable with permitting defaults. However, don’t think they won’t step in if they deem something too big to fail.

The largest casualty to date came with Tewoo Group co. a commodity trader owned by the municipal government of the northern city of Tianjin. Investors chose between a 37-66.7c cash payout per dollar on their holdings or swaps for new securities that paid a lower interest rate.

If the Chinese economy truly is turning, the timing of this purge could deleverage the government, whose debt has grown exorbitantly over the past decade. That puts the country on a firmer financial footing, and a better spot to grow sustainably into the future.

Initial retail sales for the holiday season draw a picture of the binge-worthy consumer. Talks of recession must have never made it to Main Street as holiday sales grew by 3.4%. Online sales grew by 18.8%.

Yet, online sales made up only 14.6% of total retail sales. That seems low given the dearth of store closings that hit commercial real estate the past several years.

Here’s the major e-commerce growth trends according to Mastercard:

Interestingly, department stores showed a 1.8% decline in receipts. Their omnichannel push isn’t enough to overcome the decline in their business model.

That’s what makes Wal-Mart’s recent choice to focus on supercenter store formats so bizarre. Wal-Mart CEO Doug McMillon told investors he wouldn’t win by building an unprofitable e-commerce operation. Instead, he wants to leverage the stores as mega-operational centers that do everything from delivery to selling customer data.

It reminds me of the bent that GE took to ‘diversify’ their business into tons of unrelated segments. The great investor Peter Lynch sums this idea up nicely by calling it ‘de-worsification.’

Don’t expect much from politicians through the new year, unless you count a lot of haranguing and nonsensical statements. With lawmakers out until the New Year, there won’t be much other than a lot of jawing back and forth.

I’ll be keeping my eye for any details in the Phase 1 China trade deal that actually spell out the quantities for purchases by product. Additionally, any announcements by social media platforms on how they plan to play the 2020 election could be interesting.

Keep an eye on energy markets

Crude oil is nearing the levels last seen during the terrorist attack in Saudi Arabia. Natural Gas prices might have made a double-bottom… or they could be setting up for the next leg lower.

Banks are looking at tightening credit to many of the drillers, which could force a lot of the smaller players out of the market. That should cut down supply and hopefully bring balance back to the natural gas markets at minimum.

Until then, the kids will be switching for 2% to butane.

Want even more trade ideas?
Check out how I generate weekly income with Total Alpha.