I don’t know about you, but I’m always excited to trade on Monday. Maybe it’s all the money that is flying around from M&A action—broker Charles Schwab announced it’s making an offer to acquire TD Ameritrade for a cool $26 Billie… 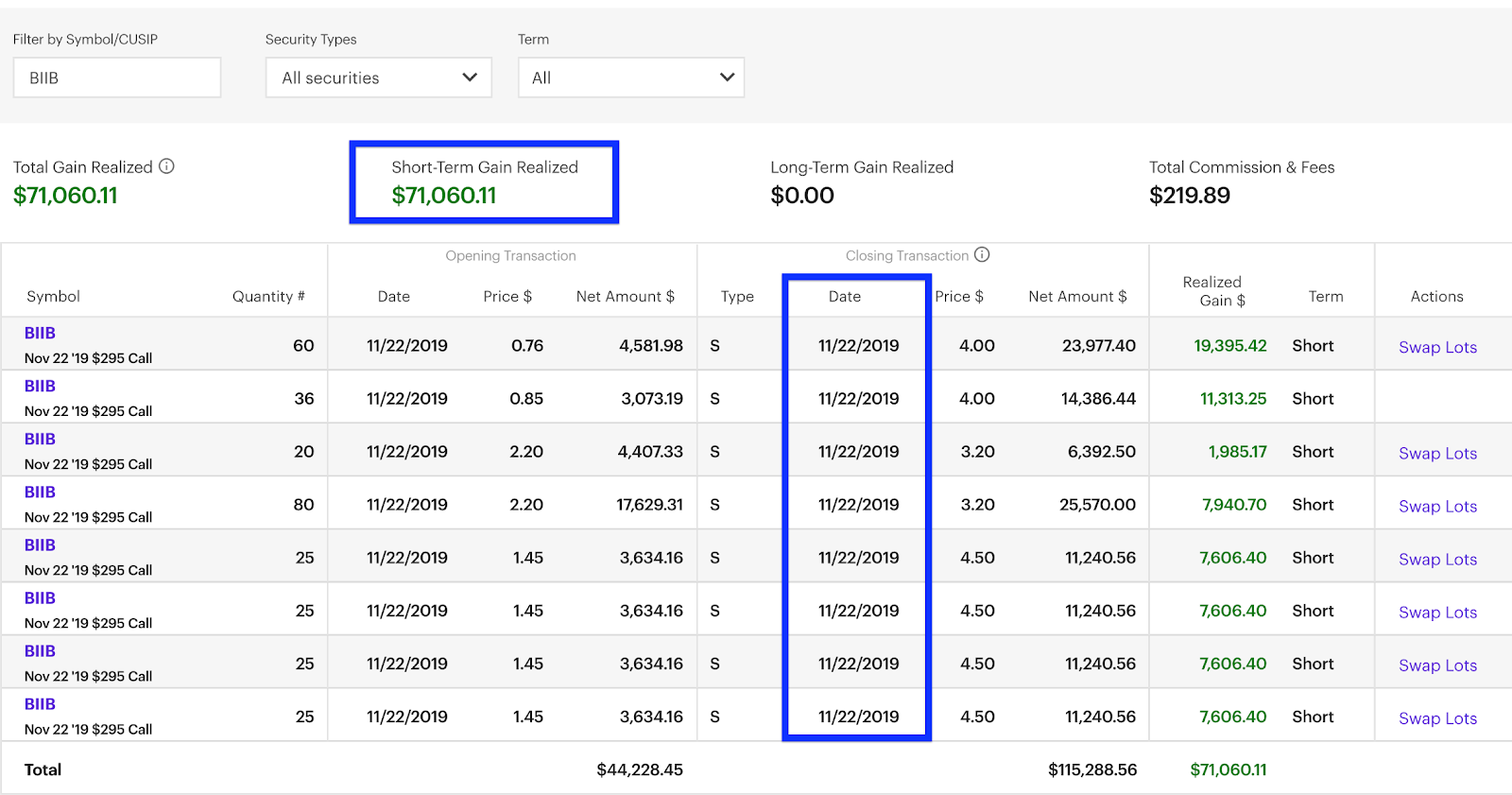 A Nice $71K trade in BIIB options on Friday before lunchtime. Not a paid-up member of Total Alpha? Click here to join.

Despite it being a shortened trading week, I go about each Monday the same—by breaking down the big picture to try and identify relationships and trends.

What is it that I’m looking at to develop this big picture view? 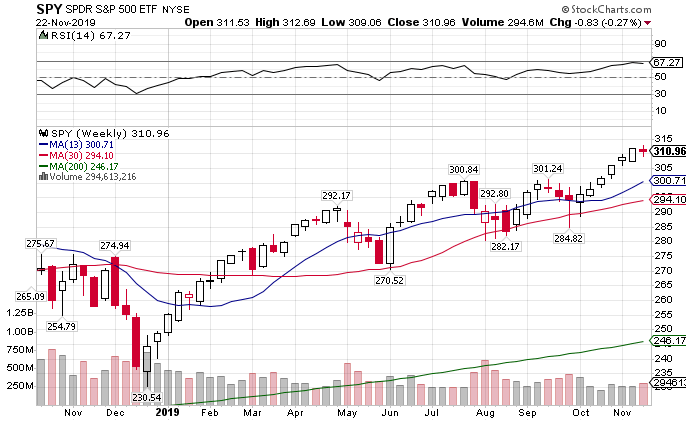 If that’s the best pullback the market can muster, it’ll be a long while before we see any downside.


The few times that bears looked like they gained control, they got shot and laid out as carpets in the bull cabins. Those were the few days that we saw any real volume.

Otherwise, it’s the same old story of large-caps rising higher with small-caps getting left in their wake. 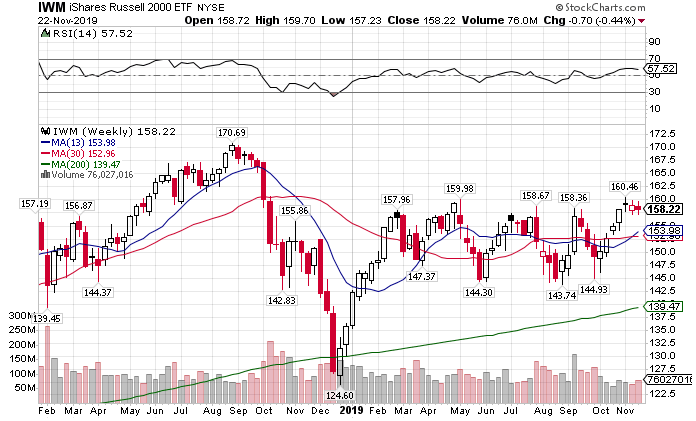 I wouldn’t be surprised to see buying into the end of the year across the board from fund managers dressing up their portfolios. You know there’s at least a few out there that were short the entire year that need to cover their tracks.

The real star of the show has been Crude Oil. Black gold managed to fake everyone out this week and finish in a bullish position.

The real driver for this market will always be global demand. With the world economy languishing, it’s tough to see any real rally happening without a change in forecasts. Right now that’s a tall order given China’s economic contraction.

Bonds trade in a defined channel 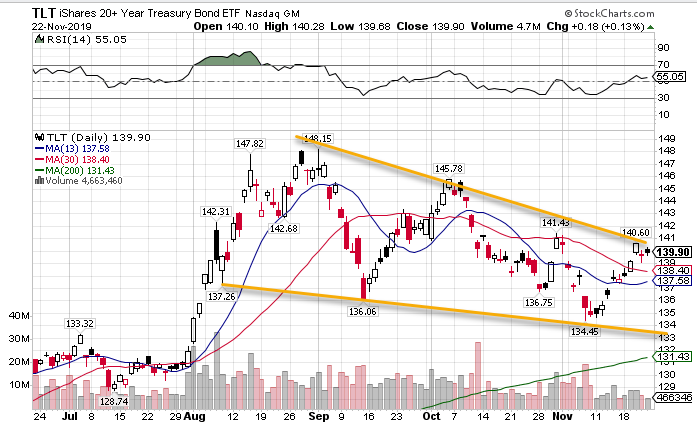 At some point, the range will compress enough to force a violent move higher or lower. If I had to pick a direction right now, I’d slip on the bond bear suit.


Gold may be getting ready to crack

Drifting lower on declining volume is much worse than higher. It’s like watching a car crash in slow motion.

Interest in gold continues to decline every day. China has already grabbed much of the bullion they wanted for their central banks. Now, we’re left with the tail end of their purchases. 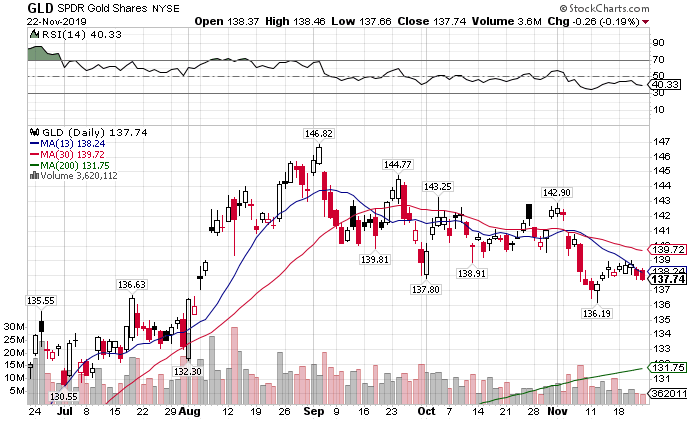 The GLD remains locked into lower prices by the 13-period simple moving average. Its next support area wouldn’t come in until the gravitational line at $131.75.

Never bet against the dollar

No matter who tells you the dollar is overbought…they turn out to be broke. Betting against the dollar works about as well as going against equities.

Other than a short reprieve in October, the dollar resumed its trend higher off a quick double bottom. 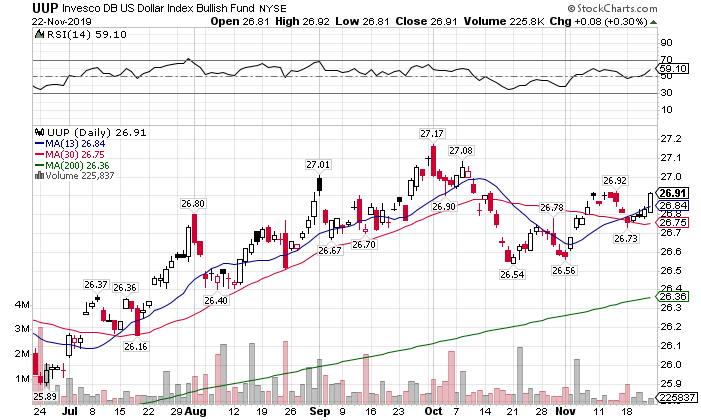 All the talk by global economists about replacing the US dollar doesn’t jive with reality. Every global country still needs dollars to trade. No other currency and government debt offer a better risk/reward than the U.S.

Usually, a strong dollar would lead to lower stock prices. However, both have risen in tandem for several years now. Maybe the old economic correlations broke… or perhaps we’ll face a day of reckoning.

Volatility says to enjoy your holiday

The VIX tried to briefly pierce $14 this week but had about as much energy as you will after this week’s meal. 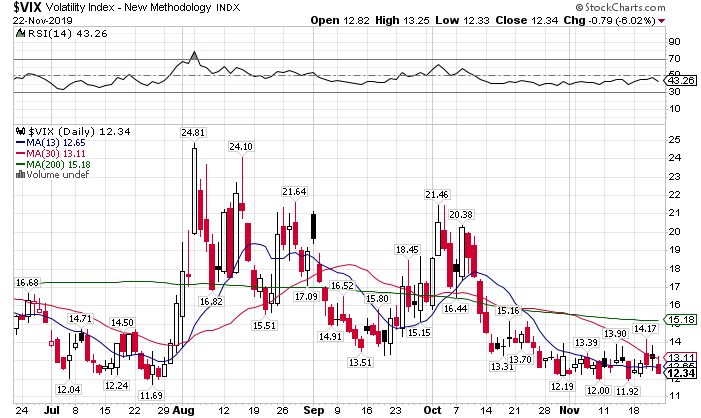 What’s fascinating is the VVIX (the VIX of the VIX) had been suggesting that we’d see more volatility since late October.

The higher we go the harder we fall. I don’t expect the VVIX to drop without the market retracing a portion of its run.

And learn how to take trades that net $71,000 in a single afternoon… life-changing trades.