Is now the time to buy into China?

The news would have you believe everything is sunshine and sparkles with the Chinese markets. Nevermind the unrest in Hong Kong, trade wars, and a shrinking population that’s stifling growth.

The talking heads point to the Chinese large-cap ETF FXI and how it’s up nearly 7% year-to-date.

Despite civil turbulence, Hong Kong ETF EWH is up 6% on the year and nearly 10%  since last week.

Even the economic news seems to be improving. This year’s singles day marked record sales in one-day consumer spending for China.

The made-up holiday for people to feel better about poor life choices garnered $38b in sales, eclipsing 2018’s paltry $30.8b.

Wasn’t it just a few weeks ago we got word that the Chinese economy only grew at 6%, the slowest in 27 ½ years?

I read reports of pork prices skyrocketing on low supply looked to take a bite of Chinese consumer spending.

What’s the real story here? Is the Chinese economy about to fall off a cliff or create another boom?

Chinese manufacturing remains a core component of the overall economy. It makes up 40% of the Gross Domestic Product (GDP). Its contribution declined in the last several years. U.S. companies make up a significant component of manufacturing in China. 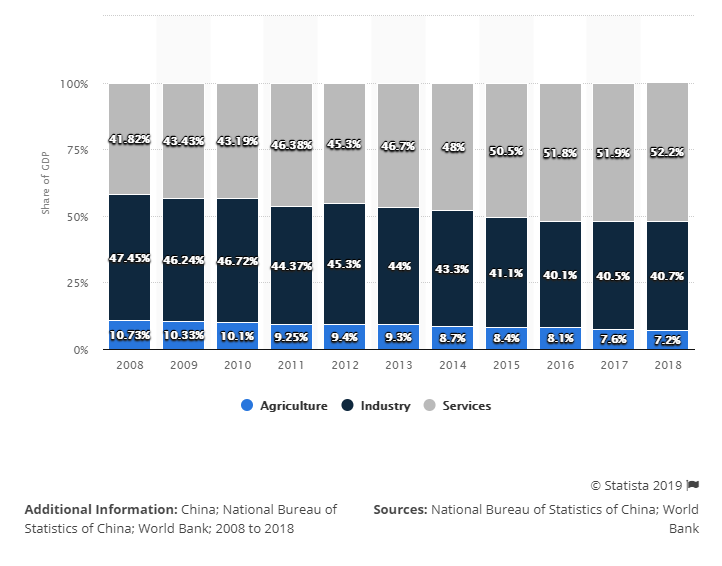 But the trade war has taken a toll. A research survey at the end of August 2018 asked 430 companies about their plans to relocate manufacturing.

Share of American manufacturers in China relocating due to the U.S.-China trade tariffs as of September 2018, by destination, Source Statisa, AmCham Shanghai, China.

The real scare came in the semiconductor industry. China’s hardware manufacturing became a staple for its global dominance. Companies like Foxconn and Apple partnered together.

Yet the higher they rise the faster they fall. You can see how Chinese semiconductor sales got hammered from not just tariffs, but global supply/demand imbalances. 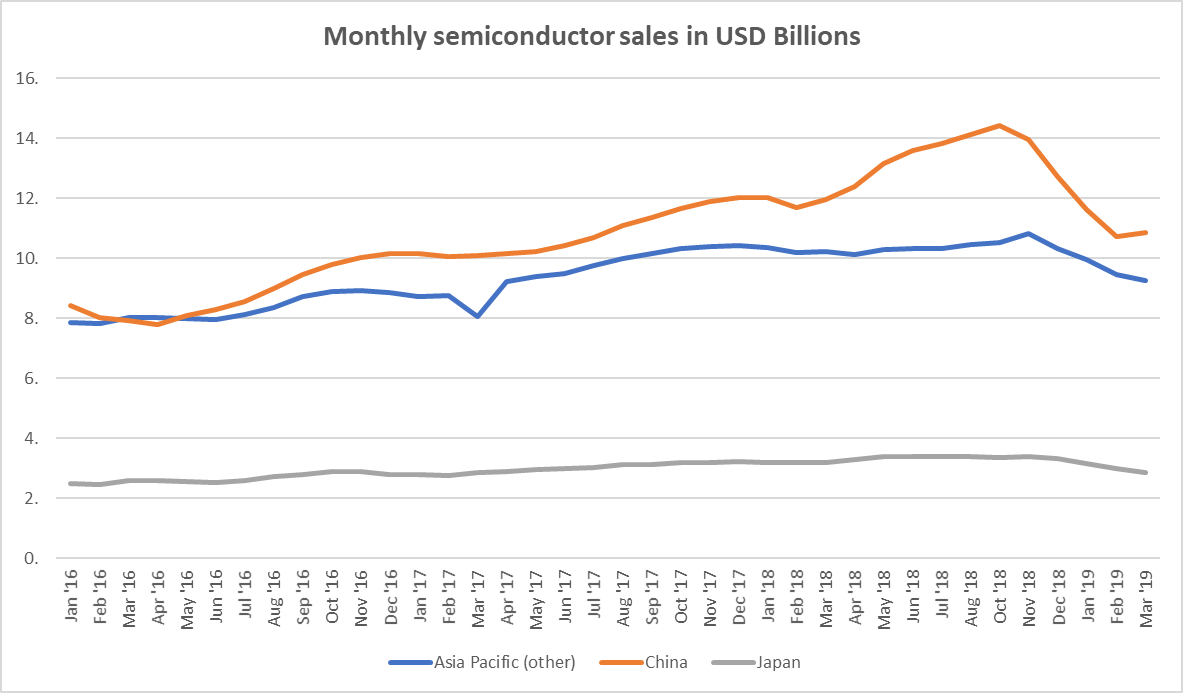 One sign of hope appears to be emerging. The manufacturing, and especially the chip sector, sank low enough that they may begin to rebound. Smartphone shipments rose last quarter for the first time in two years. Automotives aren’t falling nearly as rapidly.

But not all is hopeful. The pork price inflation is real. September saw the Chinese Consumer Price Index hit 3%. 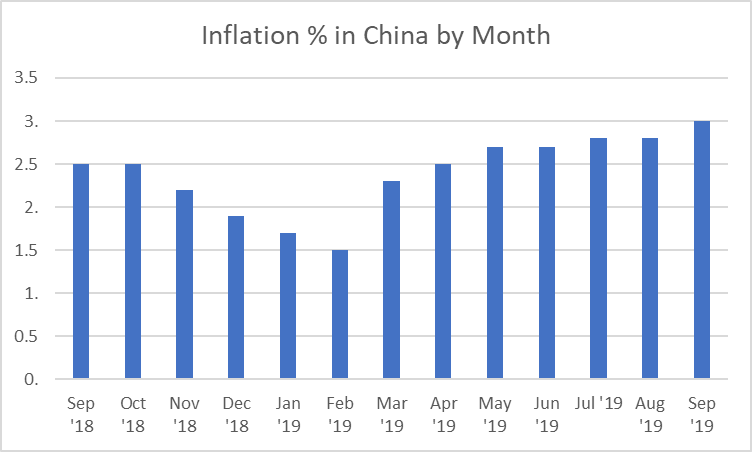 Pork prices present a particularly acute problem for Chinese consumers. It’s widely consumed within the country and a staple in many areas. African swine fever led to a contraction in domestic supply. At the same time, tariffs made it difficult to procure U.S. goods.

China’s government continues to place emphasis on consumption vs. construction. The record sales on Singles Day certainly bodes well for that theory.

However, Chinese debt-to-income rose to 92% at the end of 2018. Compare that to 30% in 2008. Much of the debt comes from mortgages. Plus, non-housing borrowing continues to rise. Couple this with high loads of corporate debt, and you’re sitting on a timebomb.

Bad for investing, good for trading

If it wasn’t apparent yet, I don’t see the Chinese market as viable for long-term investment. You’re dealing with opaque regulators, and a government trying to steer growth.

Trying to pick stocks implies the government won’t step in and pick winners and losers. Except that’s exactly what happens. You might think that BIDU works great until one wrong post shuts the site down.

The biggest problem simply comes from the debt burden. Before the credit crisis, the country held wide amounts of flexibility. For all the guff we give U.S. politicians, we’ve not gone nearly as far down the death spiral as China. 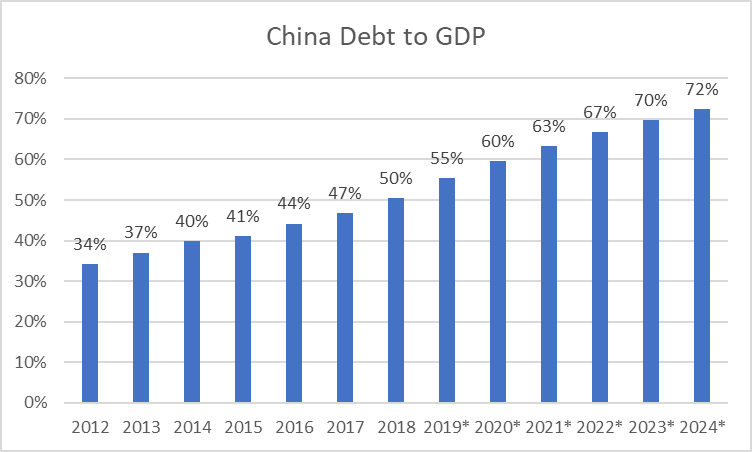 And right now, shares aren’t cheap. When you look at a monthly chart of the FXI, you’ll notice price trading in the upper part of the range. 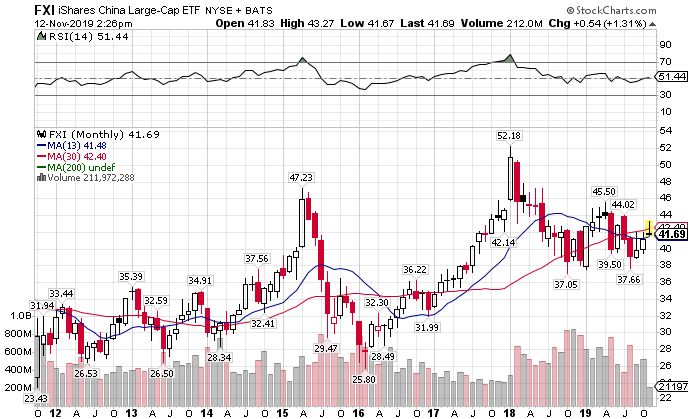 Factset’s current forward P/E on the Global X MSCI Consumer Discretionary index sits at 20, making it the most expensive in a decade. 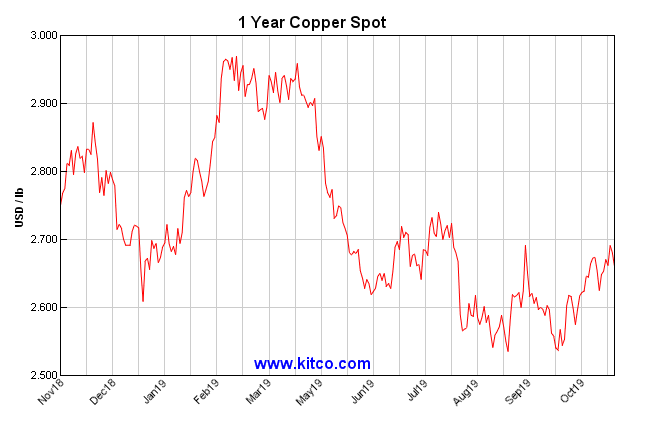 However, you can find plenty of trades out there with the right stocks and setups. You just have to know where to look.

Stocks like BIDU set up for some potential trades to the upside here. 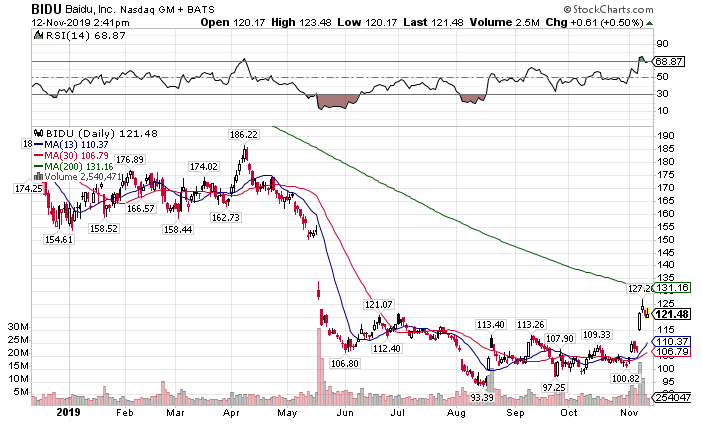 I’ve got a lot of these stocks including BABA, JD, and others on my radar.

If you want the full scoop on these upcoming trades, come join me at Total Alpha.